Who has the right to the city? The case of Cuba 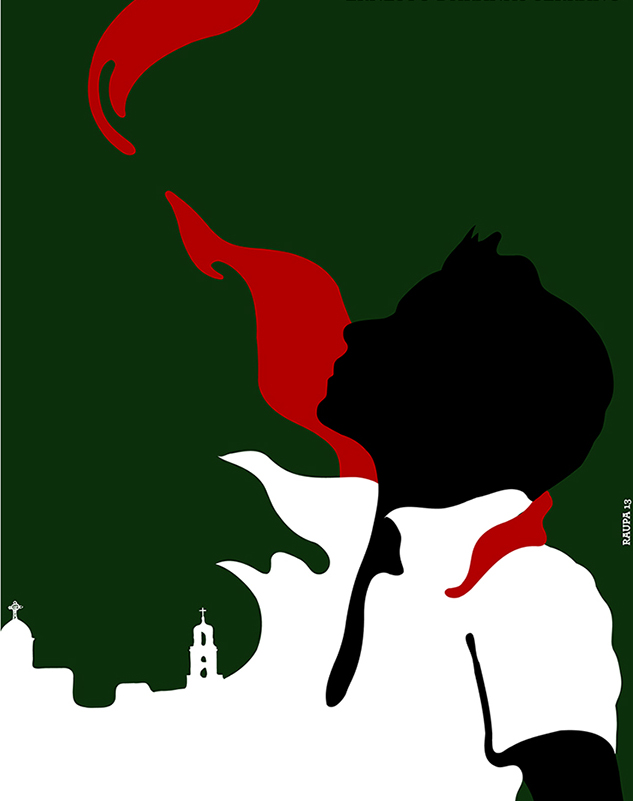 During the Cold War, Cuba functioned as an “unsinkable Soviet aircraft carrier at the coast of the USA”. On 17 December 2014, the presidents of Cuba and USA announced re-establishing diplomatic relations for the first time after 1960s. What changes would the economic, political and cultural transitions bring to the social space, where depictions of revolutionary leaders and slogans (rather than commercials) still prevail in the urban visual imagery? What aesthetic choices do the designers make, and how could possible ideological shifts influence their practices?

Day I. “Art of the Revolution”. Cuban Poster Today

Once known as “The Art of the Revolution”, poster design in Cuba was considered a perfect medium to inform, engage, and promote the social program of the socio-political processes that took place on the island after 1959. It was also an opportunity for artists to articulate a voice within the aesthetics of the new social contract. The posters of the younger generation of Cuban designers have become a graphic testimonial of contemporary Cuban life styles: an eclectic mix of survival attitude, art and propaganda, exiles, and isolation.

Nelson Ponce, Giselle Monson, Raúl González Valdés, Michelle Miyares, and Edel Rodriguez are freelance designers residing in Havana and Santa Clara. In the Cuban urban visual culture in transition, the Soviet animation and propaganda poster co-influence the expression along with the Pop Art aesthetics. Raúl González Valdés will discuss the practices of the new generation of Cuban designers in his talk.

Day II. Who has the right to the city? The case of Cuba

With the background in the idea of the social space of Henri Lefevbre, which correlates with the mode of production in the given society, the discussion will develop around the question of the visual culture and power, in relation to the processes taking place in Cuba, Norway and Russia.
Who can take decisions about the public space visual images’ placement and content? Politicians? Artists? Citizens? Who is “the citizen”?
What are the reasons that the country, where there was no revolution, provides more opportunities for expression in a public space?

Participants of the Panel Discussion:

Raúl González Valdés (Raupa) (CU) was born in Havana in 1980. Graphic Designer, graduated from the Higher Institute of Industrial Design (ISDI) in 2005. He has worked for Museo Nacional de Bellas Artes, Casa de las Americas, The Cuban Book Institute, The National Council of Performing Arts, The Martin Luther King Foundation, The Contemporary Art Center Wifredo Lam, 12th International Festival of Theatre of Havana, The 9th Havana Biennial and other key art institutions in Cuba. He has worked with film posters. He represented Cuba at The San Luis Shakespeare Festival, USA (2009) and for institutions such as Havana Club, in charge of art direction credits at the site havanacultura.com, France; Casa de las Americas and ICAIC (Cuban Institute of Cinematographic Arts and Industry).

Curators: Ekaterina Sharova (RU-NO) is a curator born in Arkhangelsk (Russia) and educated at the University of Oslo. She has been co-curating The First Supper Symposium, Oslo; The Mobile Institute (parallel project at the Manifesta Biennial, Saint Petersburg); video art program for Oslo Screen Festival; project DIALOG/ДИАЛОГ together with Tanja Thorjussen and others. She is involved into work of the Arctic Art Institute in Murmansk (Russia), which works with re-actualization of the Soviet industrial ruins and creates new social spaces in the Russian Arctic. Ksenia Aksenova (RU-NO) is an artist and a 1MA student at the Academy of Fine Art in Oslo. She was born in St. Petersburg (Russia), studied linguistics and art history in Moscow. Among other projects Ksenia has been involved in are Venice Biennial Central Asian Pavillion and The First Supper Symposium. Currently she is a co-organizer of Akademirommet at Kunstnernes Hus, Oslo.