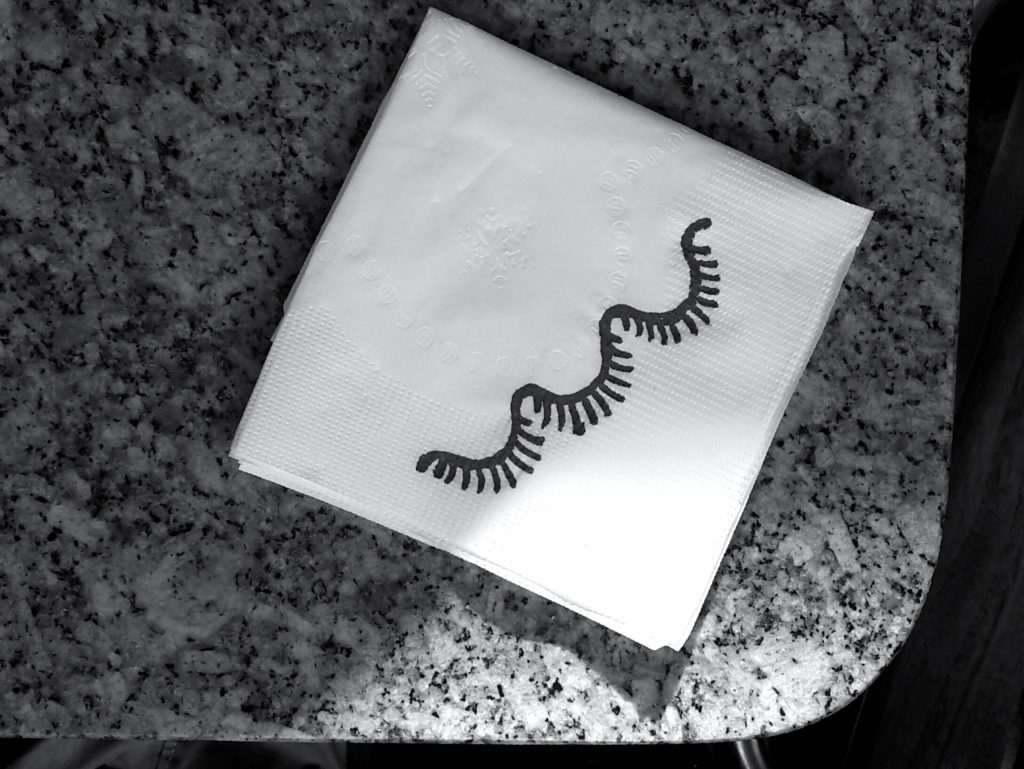 There’s a story by Borges called “The Circular Ruins”. It’s about a stranger who wishes to create a man by dreaming him. There’s also a girl who thinks about it sometimes. Not actively, that wouldn’t be her style, but once in a while, in the midst of things, making a coffee or bagging office supplies for a customer, it will pass through her mind. She works in a bookstore in the outskirts of the city centre, that murky area in every city the locals still refer to as central, but which tourists and newcomers insist on calling “all the way out there”.

It’s a low frequented part of town and a strange place for a bookstore, so they rarely have actual customers. Instead, her main activity is writing down people’s confessions. She herself has no apparent qualifications. No god or faith, no APs in psychology. It’s a way to spend time, if anything. How it usually goes is: Someone will come into the store, and sometimes they will be very blunt about it, but other times they will not, will maybe start speaking about trams and ask for some new poetry, but she’s been doing this for a long time so she usually knows when to get out her pencil and notepad. What she does is write down word for word what someone tells, and when it’s finished, the person will leave and she will fold the paper once, walk up to a shelf, pick out a book and stick the paper in among the pages, then put the book back. She does not consider the things she hears. She has a truth hiding in her mind and that truth is this: The greatest privilege a person of our time can have is to be free from biography.

One day a famous artist came to visit her. She knew him mostly from interviews, but imagined also to have seen his work on one or two occasions. He started speaking the moment he came through the door. He spoke for a long time. Then he stopped, and left as fast as he came. She stood watching the door for a while, then collected herself, folded the paper, walked towards the shelf with yoga books.

The story he’d told was about a student at the university where he sometimes teaches. They were having a conversation on art practice when the student shared with him an idea for a work, an idea so clear and inspired, in fact, that the artist had become extremely envious. As time passed, the artist reasoned that what he felt was not only envy, but anger, an almost Woolfian anger stemming from the knowledge that the student would surely destroy the thing he had thought, as naive and inexperienced as he was. What was good and right was to leave the idea for someone with a more finely tuned sensibility to realise. As more time passed where the student still had not made the work, the artist became fully convinced that it was undoubtedly within his right to make it himself. It didn’t take long. In fact it was the easiest project he ever did. He finished in one evening, snapped two photos as documentation and sent them, along with some texts, to his gallerist. Then he went to bed and slept as sound as only a prophet can. Early next morning he received an email with the subject line “let’s make a show!”. The artist panicked. He realised that showing the work also meant revealing his actions, and that the righteousness he had felt in stealing the idea was not necessarily as easily explained to others. If someone now saw the work, it would be impossible for them to imagine it any other way, in any other form. Now that the idea of the work and the work itself were the same, if people knew the story, they would look at his work and see the idea of the student. Which was of course wrong and completely horrible, but what good would it do to say that. He would only seem like more of an ass. No, the only thing he could do, the artist ended by saying, was to never show the work, not to anyone. This is why I came to find you, he said. I had to tell someone.

She couldn’t say what herself, maybe it was the recognition of some shared sentiment that kept her thinking about him. It wasn’t too difficult to find out where he lived. The next day was her day off, so she decided to visit. Maybe she could even convince him to let her see it. He looked surprised when he opened the door. “I didn’t know you made house calls?” They both laughed. She admitted to being strangely enthralled by his story, and was curious to hear if he had already destroyed the work. He tilted his head slightly to that last word, “work”, as you would to something alien, then thanked her for the concern. “You know, I really did it, thanks to you. I called her right after I left your store. I told her I wasn’t going to let myself be treated like a dog anymore. She called me a hundred times after but I didn’t reply, just sent a text: Leave me alone or I will call your husband. Of course, she stopped. Can you imagine?” He invited her in for coffee, but the girl had already turned to walk away. Her ears were ringing with questions. She found a park and stayed until nightfall, looking for birds.

The next day when an elderly woman came in and started speaking, her voice like something broadcasted, the girl glanced at her, picked up some books and walked to the other end of the store to place them in the children’s section. The woman was left slightly confused in the middle of the space. For a while she kept on speaking loudly, then gradually softer, until, with a mumble, she left.

Dreams and Fictions is an exhibition with new works by MA student Miriam Myrstad. Four posters with handwritten notations of four individual dreams, though not necessarily recounted by the dreamers themselves, and one recent sculptural installation. Who is free from biography? And can anyone be free from the imagination of others? 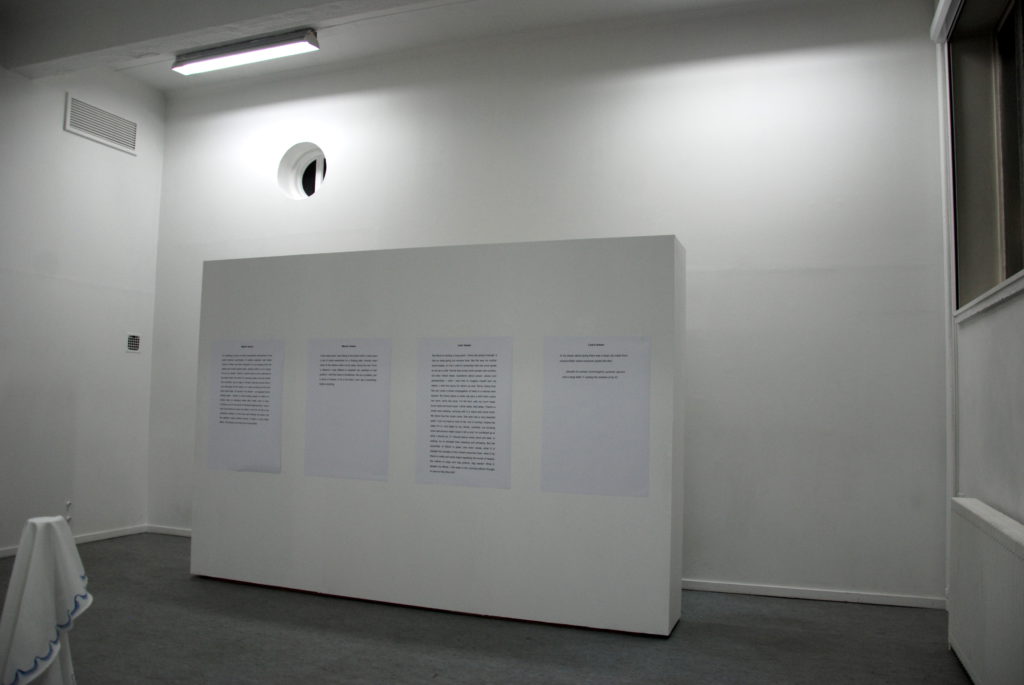 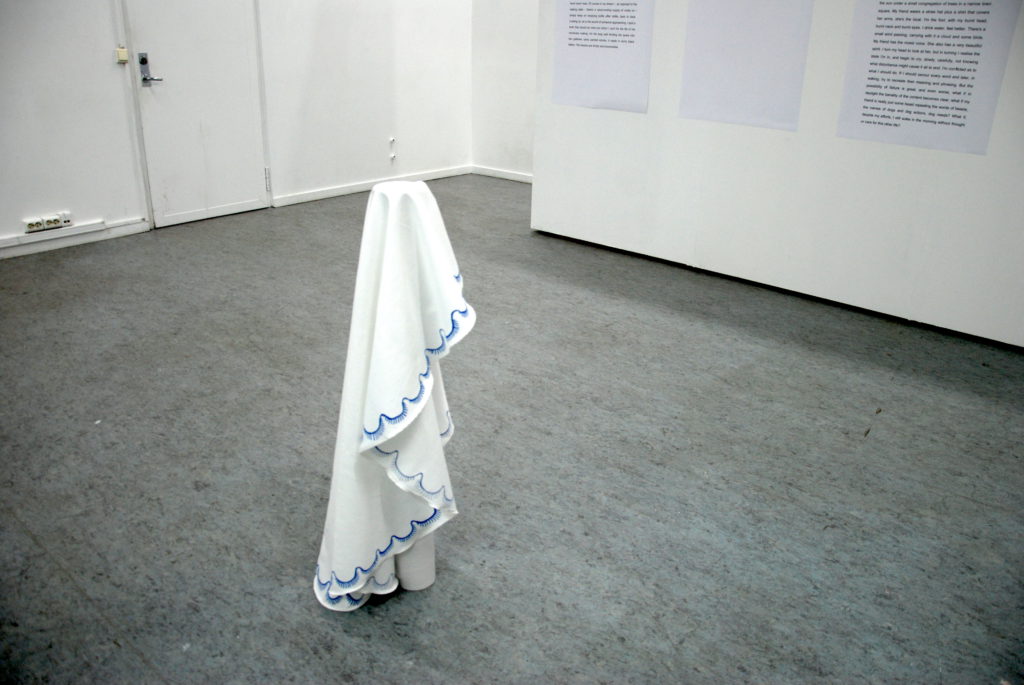 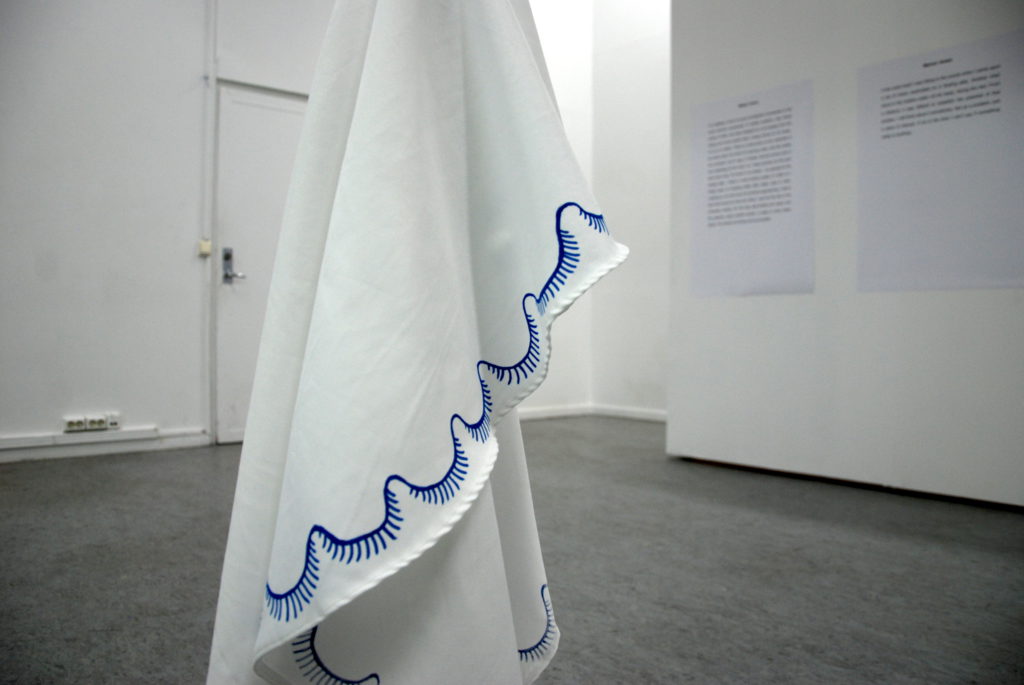 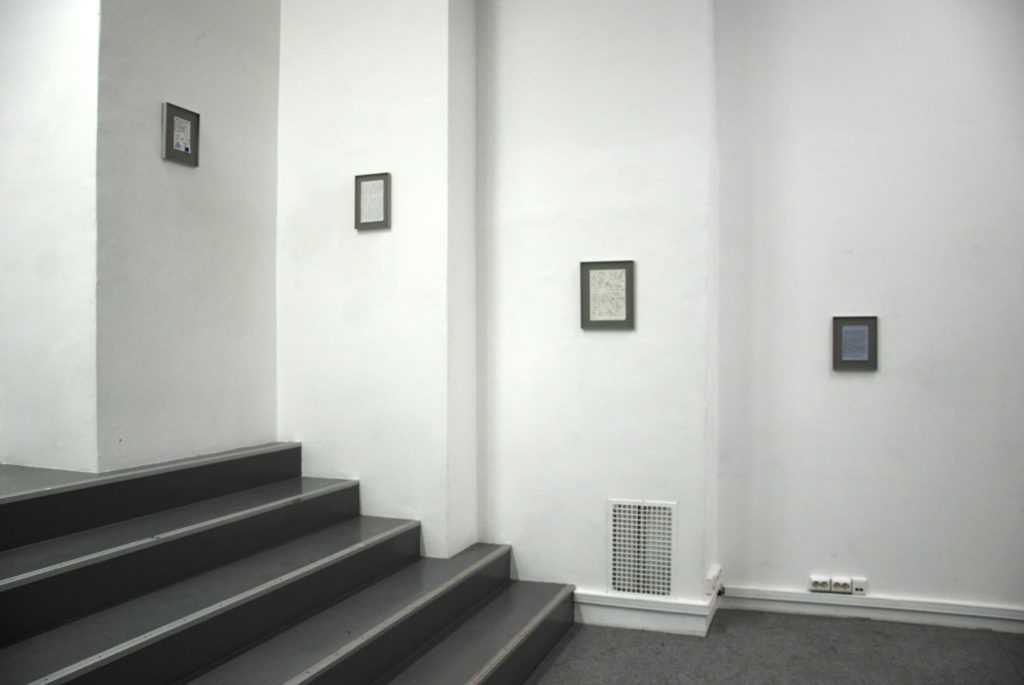 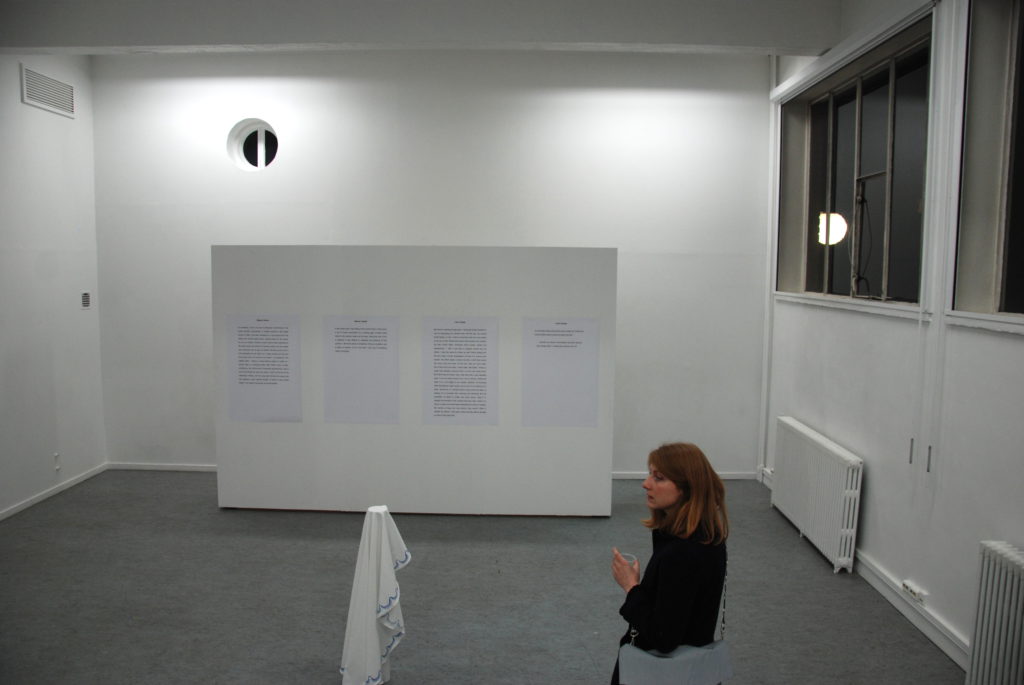 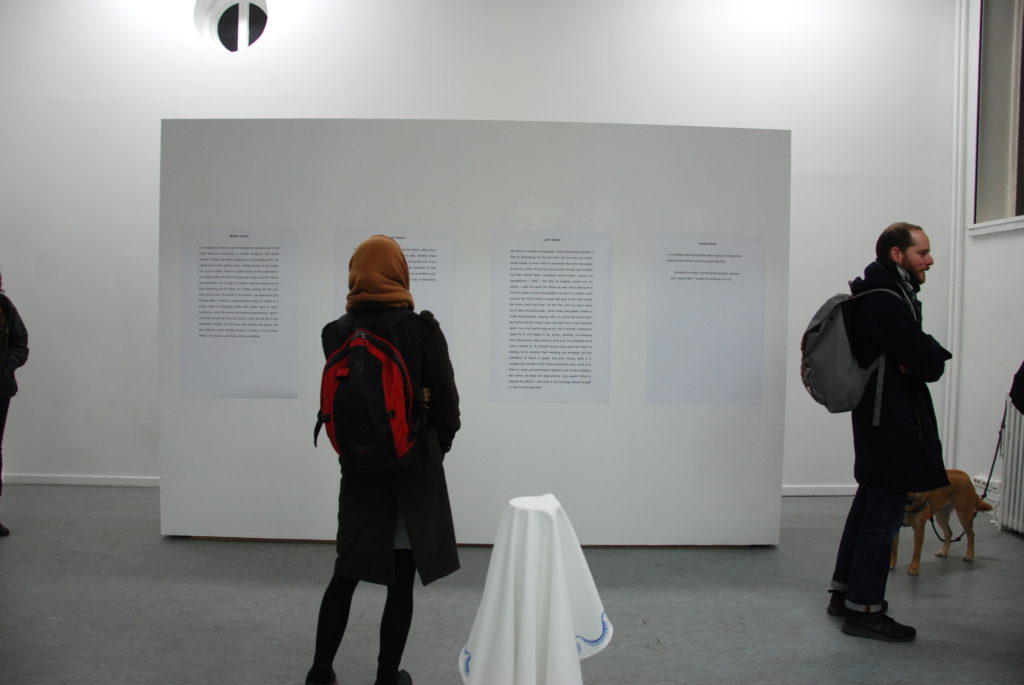 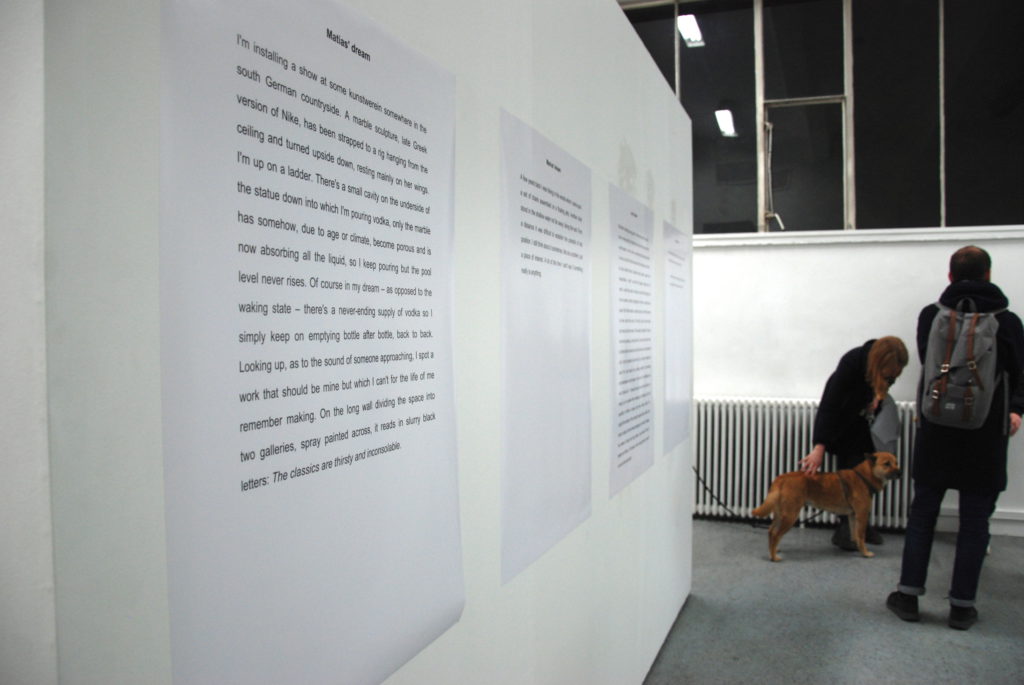